The guy here is teetering on the edge of certifiably insane. BUT, he’s awesome, he’s nice, and he’s cheap! This guy has been meeting my South African friend and asking him about his Cooper S and his English origin…about 6 times now with no recall of previous conversations. He almost hollered at us from the parking lot. Really strange.

Yet, he’s a hilarious guy, who offers decent equipment at pretty darned reasonable prices (especially given he rents primarily to people at Heavenly). He even offered us coffee and a board-waxing for my friend the morning we came in at 8am. Seriously great guy with cheap prices. I’ll take it.

We are proud to offer these product brands in our gear rental inventory
Salomon, K2, Rossignol, Atomic, Nordica, Fischer 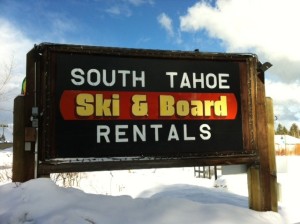 The Ski Renter at